Polluters Sponsoring COP26:
What can be done?

By Joanna, Robin and Scott

Why do fossil fuel companies still get to sponsor international negotiations to tackle climate change? At the UN climate talks big polluters are lining up for the PR opportunity to splash their brand all over events supposedly driving climate action. Big coal, oil and gas companies know they’ve got a bad reputation, as public awareness and concern over fossil fuels’ role in the climate crisis intensifies. A few well-placed posters are much cheaper than changing their entire business model, so every year big polluters put their big profits into manufacturing the illusion that they are part of the solution.

Let’s take the last meeting of the UN climate talks, COP25, which took place in Madrid. The sponsors here included Iberdrola, Suez, and Santander: a mixture of high fossil fuel energy companies and banks, leading to the COP looking like a playground for polluters.

COP24 in Katowice, Poland, was even worse, heavily sponsored by state-owned coal companies. And even COP21, where the Paris Agreement was formed and some significant progress was made, was sponsored by coal and nuclear giants like Engie and EDF Energy and fossil fuel investing banks like BNP Paribas.

Not only is the space outside of the COP up for sale, but the ‘pavilions’ or inside showcase spaces for countries are also open to corporate takeover. Barclays, a big investor in fracking, pipelines and fossil fuels across the world, was a key sponsor of the UK’s pavilion at COP23 in 2017.

On average, 90% of the oil and gas majors’ capital is still invested in fossil fuels. And some banks have funneled $2.7 trillion USD into fossil fuels in the first four years after the Paris Agreement was adopted. Quite clearly, these are not companies who want ambitious climate action or an international agreement on emission reduction targets. It seems like the only solution they’ve got is PR! And yet, despite their clear disregard for meaningful climate action, these polluters have been bestowed with an ‘access all areas pass’ to the talks thus far, with some even boasting of their influence over proceedings. It is perhaps no surprise that the talks have not yet yielded anything close to the progress required to avert climate disaster.

And sponsorship isn’t the only way big polluters infiltrate the climate negotiations. In fact it’s the tip of the iceberg. For example, in the three years following the Paris Agreement, the five largest publicly-traded oil and gas majors (ExxonMobil, Royal Dutch Shell, Chevron, BP and Total) have invested over $1bn of shareholder funds in misleading climate-related branding and lobbying. But that is a blog for another day.

Next year, when COP26 will be hosted in Glasgow, things could be different. Could the UK be the first host of a COP in many years to not have companies with a financially vested interest in keeping things as they are, the exact opposite of the state aim of the talks, surround the conference with their advertising?

The COP26 organisers (i.e. the UK government) have published a series of criteria for sponsors to fulfill:

These criteria should mean that sponsorship of COP26 does not include companies who have released vague statements to reach net zero by 2050 and possess no ‘credible short term plan to achieve this’, such as BP and Shell. It should also not include businesses who are big coal users and use large areas of land to grow trees whose carbon emissions when burnt aren’t accounted for properly, like Drax.

However, recent FOI revelations obtained by Culture Unstained show that Shell, BP and Equinor are already meeting the UK government about COP26 and brazenly offering money for visibility around the event. 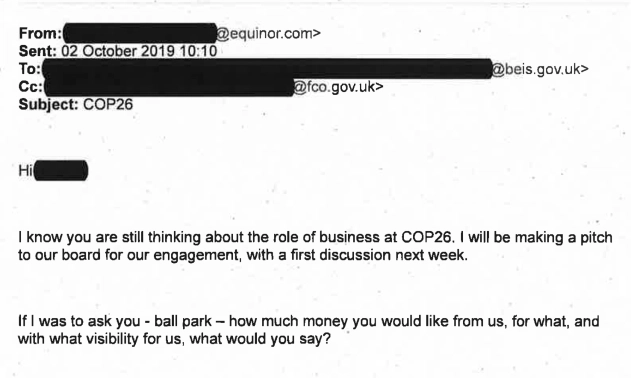 The first two criteria are worryingly vague, and even having a net zero commitment by 2050 is an insufficiently late target and dependent on speculative and controversial technological ideas like BECCS (Bio-energy with carbon capture and storage). Even so, the small print of the criteria does not allow offsetting, where companies can buy credits and keep polluting, and does include the actual use of the oil and gas products (known as scope 3 emissions), which is an often overlooked area by oil and gas companies. This could tighten some potential loopholes prospective sponsors will inevitably try to exploit.

There are further criteria when progressing through registering as a potential sponsor, including violations of human rights or environmental law, UN sanctions and other illicit activity. This again could rule out some of the major oil and gas companies.

We will be eagerly awaiting which companies the COP26 organisers do deem to fit all the criteria, how they are playing a part in decarbonising our economy and we will be scrutinising their ‘commitments to making COP26 a success’.

Other reporting on this: