It’s all very well for Boris Johnson to talk about Building Back Better – a phrase he shamelessly co-opted – but it means very little without meaningful action.

Our nominees are institutions who are meaninfully committed to building back badly.

On the 5th June 2020, Governor of the Bank of England Andrew Bailey co-wrote a piece saying that the pandemic “offers us a once-in-a-lifetime opportunity to rebuild our economy” to prevent climate breakdown? Why, then, has he been giving bailouts to big polluters?

Amongst a fairly extensive list of bad actors, the Bank of England has given £600 million to oil company Baker Hughes, as well as aviation giants EasyJet and Ryanair, with no strings attached. When picked up on this climate-wrecking approach, Andrew Bailey said that he will take forward action to exclude fossil fuels as “a priority”.

It appeared for a brief moment that the Bank of England had finally ditched fossil fuels from it’s portfolio – but it turned out to be a well-orchestrated hoax from The Yes Men. When pressed on why he’s twiddling his thumbs as the planet burns, Andrew Bailey said that “seriously, I don’t feel that there is any lack of leadership from the Bank of England on Climate Change”.

We call bulls***: saying on the one hand that you plan on addressing climate, then ignoring the issue is a lack of leadership. This should not be a controversial step, despite Andrew Bailey’s protestations to the contrary. Maybe a wee award would get his backside in gear? 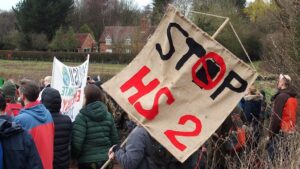 When it comes to “building back badly”, you can’t find a more perfect example of a building project that’s destroying ancient woodlands, harming communities and wrecking some of the UK’s most important nature sites than the HS2 high speed railway line!

HS2 has been described by Chris Packham as “one of the largest deforestation programmes since the First World War” and it’s such a massive source of carbon emissions that it will never be carbon neutral.

The first phase between London and Birmingham is currently under construction and according to The Wildlife Trusts, HS2’s construction is set to destroy or irreparably damage: 108 ancient woodlands, 693 classified local wildlife sites, 33 Sites of Special Scientific Interest, 21 designated local nature reserves and 5 internationally important wildlife refuges protected by UK law.

In September 2020, Boris Johnson pledged to protect 30% of the UK’s land by 2030 in order to support wildlife that is already in crisis and insisted that: “We can’t afford dither and delay because biodiversity loss is happening today [..] If left unchecked, the consequences will be catastrophic for us all. […] Extinction is forever.” 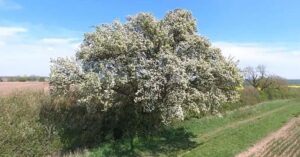 Unfortunately, this commitment to protecting biodiversity and wildlife doesn’t seem to extend to the birds, bats, badgers and other wildlife whose homes are being destroyed for HS2 or the ancient woodlands which are already being felled.

These include Jones’ Hill Wood in Buckinghamshire, which inspired Roald Dahl to write Fantastic Mr Fox, Grim’s Ditch Iron Age site in the Chiltern Hills and South Cubbington Wood in Warwickshire where England’s former tree of the year, the 250- year-old Cubbington Pear Tree, was felled in October. The line was, however, rerouted to save the 18th hole of a nearby golf course.

With the first trains not due to run before 2029 at the earliest and spiralling costs which are already £800 million over budget for a railway designed to cater for business passengers who may never need it due to changes in working patterns, HS2 is the ultimate example of building back badly.

As the @GOVUK & @BorisJohnson co-hosts the virtual #ClimateAmbitionSummit, a reminder to them that actions speak louder than words. #HS2 will never be carbon neutral in its 120-year lifespan and is tearing through irreplaceable ancient woodland #StopHS2 #StopEcocide pic.twitter.com/6iTXlZf75o

Peel Holdings website proudly proclaims that the company is positively impacting peoples’ lives. While it has been positively impacting the finances of John Whittaker who established the company 40 years ago, the same cannot be said of the inhabitants of the North of England and Southern Scotland who are impacted by this company’s building back badly. The shadowy, little-known firm – a private company registered to the Isle of Man – has been wreaking havoc on the local environment wherever it goes for years.

Up until 2012 when it was halted following a public enquiry Peel had come under particular fire for allowing peat extraction on its land at Chat Moss, Salford’s ‘rainforest’.

In 2015 Peel Ports created a biomass terminal at Liverpool’s Gladstone Dock to facilitate the importation of wood pellets, derived from the destruction of wetland forests in the Southern US, which are then transported by rail to Drax power station, where they are burned, releasing vast quantities of CO2 into the atmosphere.

Peel wants to expand its port operations further in Liverpool, as well as increasing pollution from shipping this will lead to increased traffic on the roads which Highways England  wants to deal with by extending the nearby motorway right through  Rimrose Valley country park.

Peel is also attempting to expand Liverpool Airport, encroaching onto greenbelt land at Oglet Shore. The Oglet is adjacent to the internationally important wetland areas of the Mersey which has RAMSAR status and is home to many RSPB Red List farmland birds such as grey partridge, snipe and lapwings.

Peel doesn’t spend money on flashy advertising campaigns but prefers to operate by stealth, it’s particular forte being to get its feet under the table at local government level and with other decision-making bodies. Back in 2014 high level collusion was found between Peel Holdings and Salford Council when a `Memorandum of Understanding’ obtained under the Freedom of Information Act revealed that Salford Council, I-Gas, Greater Manchester Police, Peel Holdings and other organisations were sharing intelligence, communications and branding during the anti-fracking protests at Barton Moss. More recentlyPeel’s cosy relationship with Highways England on its road plans, was revealed by Freedom of Information requests

A recent report by The British Lung Foundation found that there are 1000 plus deaths directly attributable to toxic air pollution levels in the deprived areas of Liverpool, two such areas being that around the air and sea ports. Do these people think Peel is positively impacting their lives? We don’t think so!

To find out more about Peel Ports & its dastardly plans to build back badly, please see Save Rimrose Valley.

SSE and Scottish Government for BiFab

A consequence of decades of failure in industrial strategy has led to a shambolic situation at the BiFab yards in Fife and Lewis. With many workers already let go, in the last couple of weeks the prospect of 500 jobs from work beginning in January has now also been lost. With no requirements for local manufacturing content, BiFab has found itself unable to compete with large, state-backed energy companies and with no requirements for domestic manufacturing- in the last week, the owner has placed the company into administration.

SSE, who recently launched their own internal Just Transition Plan, has demonstrated that their approach is ‘we’ll look after ours, you look after yours’ with the nearby BiFab yards overlooked for a contract worth £2bn for the Seagreen wind farm. Instead, the fabrication will be carried out at a yard in China, conveniently located in a ‘Free Trade Zone’ and from which turbine jackets can be shipped one or two at a time from the east of China to the coast of Fife.

This is the market at work as they say but in the face of criticism SSE sought to turn the focus onto the Scottish Government – accusing them as 33% shareholders in BiFab of producing a bid that was never competitive. The Scottish Government disagreed and threw the buck straight back to SSE, but also requested that the company keep the news about the contract award to themselves, so as not to forewarn the trade unions.

The work that had been secured to begin in January, fabricating 8 jackets of a total of 54 for the NnG wind farm also off the coast of Fife, was lost when the Scottish Government walked away from the guarantees requested. So began a new round of accusations, and even the most accomplished Cluedo player would be utterly lost at the number of possible suspects and means – what is clear through, is that the victim is the Scottish Government’s desire to be seen as leading on ‘just transition’. No work for BiFab from two projects  worth a total of £5bn worth of contracts and 168 turbines to be around 40 miles off the east coast of Fife is a truly staggering failure, and one that the Scottish Government could have prevented.

For the workers who now approach Christmas after losing their jobs for next month, this is a hammer blow – and it has exposed the reality of the green economy in Scotland as warm words on green jobs turn icy cold.

We added Heathrow Airport to this award category following their successful attempt to overturn the court decision to block the proposed Third Runway. Heathrow successfully argued that the initial ruling to block the Third Runway was based on older, less stringent climate targets, so Heathrow should proceed. Hooray for legal loopholes!

The feasibility of a post-pandemic airport expansion still seems unlikely, given that nobody is really flying now. But that has not stopped Heathrow from pushing forward. Their greenwashing plan – oops, sorry, their “sustainable growth” plan – would see them become a “zero carbon airport”, with measures like improving energy efficiency. But 95% of the airport’s emissions come, as you would expect, from flying planes belching out emissions from fossil fuels.

It’s a project so toxic and mind-bendingly stupid that even Boris Johnson does not back it. Therefore it is ideal for our Building Back Badly Award!